Billionaires of the world ranked and charted

From Flowing data, links and commentary on an interactive chart called "Bloomberg's Billionaires", where you can see who the world's billionaires are and how they compare to each other: 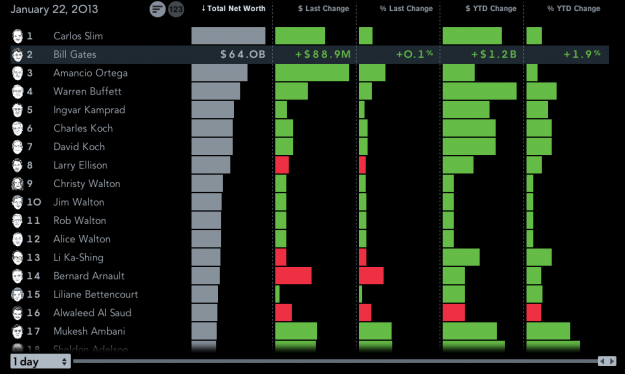 There are four main views. The one above shows rankings, their estimated net worth, and the change from the previous estimate. Below is a simple ranking of the world's billionaires. Each floating head is clickable so that you can more information about the individuals, such as a short bio and where there money is from.

It gets more interesting when you click around and explore. For example, there's a plotting view, and the floating heads transition to their sectors, still sorted by ranking:

...[You can] Filter by gender, industry, citizenship, age, and whether or not a billionaire's money was mostly inherited. The slider on the bottom allows you to go back in time to see rankings and net worth change. That part did seem buggy though, as heads seem to disappear or get stuck if you shift too much.

Fascinating, if voyeuristic, and in the typical vein of media obsession with the rich. If Bloomberg produced "Bloomburg's Penniless," and told us all about some of the world's poorest people and just exactly how they got there, would we pay attention?

Email ThisBlogThis!Share to TwitterShare to FacebookShare to Pinterest
Labels: 1%, infographic