100 Years of Tax Law in Canada 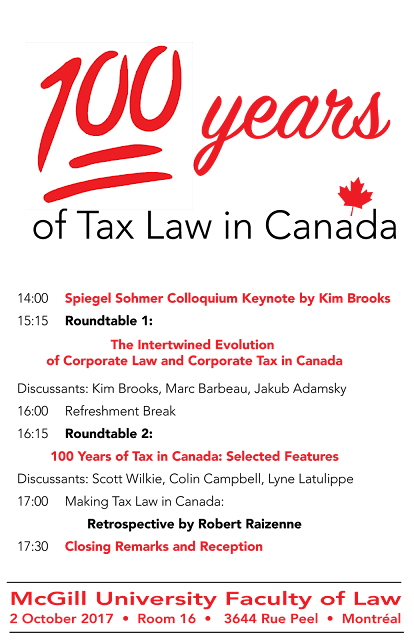 
Robert Raizenne, adjunct professor of tax law at McGill Faculty of Law and partner, Osler, Hoskin & Harcourt LLP. Me. Raizenne has extensive experience in a wide variety of tax matters and is a sought-after speaker and writer on national and international tax topics.

This event is free and open to the public.
Posted by Allison at 5:12 PM No comments:

Irene Burgers (University of Groningen - Faculty of Economics and Business) and  Irma Mosquera Valderrama (IBFD) recently posted Corporate Taxation and BEPS: A Fair Slice for Developing Countries?, which explores the link between perceptions of fairness in the allocation of international tax revenues and buy-in to the BEPS framework by developing countries. Here is the abstract:

This is an important analysis because it is clear that the meaningful participation of non-OECD countries in the development of international tax norms going forward is both difficult and imperative in terms of both legitimacy and effectiveness of the evolving international tax order.
Posted by Allison at 3:54 PM No comments:

2017 marks the centennial of Canada's federal income tax, so it is appropriate that this year’s tax policy colloquium at McGill Law will focus on the theme of 100 Years of Tax Law in Canada. The colloquium is made possible by a grant from Spiegel Sohmer. The land on which we gather is the traditional territory of the Kanien’keha:ka (Mohawk), a place which has long served as a site of meeting and exchange amongst nations.

The distinguished speakers who will contribute to this year’s colloquium include:


The colloquium is open to all.