I've been fielding several "what is is this DBCFT idea" kinds of questions so I thought it might be helpful to present the six basic features of the DBCFT as proposed (in very general form) by Paul Ryan and a very simple chart to explain how the DBCFT would "work" if it was enacted as described in Ryan's "Better Way" plan.*

Accordingly, based on that proposal, the six main features of the DBCFT would be:

Obviously these are oversimplifications and I'm ignoring transition rules and so on, but these are the basic building blocks. The Ryan plan proposes a tax rate of 20%.

So what happens if these building blocks are put in place via legislation, assuming away all transition issues etc., and that a tax imposed is a tax collected?** If we imagine a product that will sell for $125, and costs $100 to produce (in materials and labour), this is what happens: 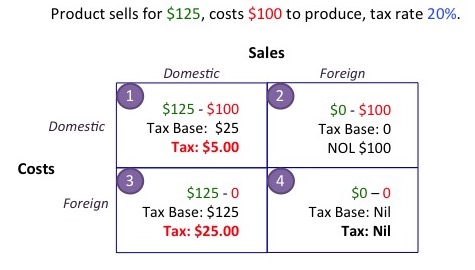 Box 1: MAGA ideal: made in America, by Americans, for Americans. Tax will be collected on profits earned by selling goods produced & sold domestically. The DBCFT most resembles an income tax in this scenario (though expensing and non-deductibility of interest still moves it toward a consumption base); it will also be the easiest to collect.

Box 2: Exports. Tax exemption for sales abroad will create (possibly permanent) NOLs to carry forward indefinitely. This will require deciding on loss-shifting policy. This is obviously not an income tax but it not a VAT either.

Box 3: Imports. Sales in the US of goods produced abroad are taxed on a gross basis, more like an excise tax (or yes, a tariff). With an estimated $1.2 trillion trade deficit, this part of the DBCFT is expected to raise the most revenue but the success of that strategy depends to some degree (maybe a large degree) on remote sellers collecting tax (that’s complicated--see Europe).

Box 4: Foreign Sales of Foreign Products. Neither costs nor revenues are counted for goods produced and sold abroad, even if produced and sold by a US-based company. This part of the DBCFT would be more or less consistent with either a VAT or territorial income tax.

That, in a nutshell, is the basic skeleton of the DBCFT as proposed in the Ryan plan. It will be interesting to see what, if any, of this ends up enacted IRL.

* There is absolutely zero chance that the proposal will be enacted as described. Still, it is helpful to understand the basic vision. I do not claim to be an expert on the DBCFT and offer here no analysis or predictions about the incidence of the tax, or the impact such a tax would have on US or world capital flows, investment, consumption, economic growth, or international relations. This paper by Wei Cui, or this one by Wolfgang Schoen are helpful in addressing many of these issues.
** A tax imposed is never a tax collected. There is always a gap between a great idea (or for that matter a not so great idea) and something that can actually be carried out: tax administration is tax policy.

Arthur Cockfield has posted a paper of interest, entitled How Countries Should Share Tax Information. Here is the abstract:


There are increasing policy concerns that aggressive international tax avoidance and offshore tax evasion significantly reduce government revenues. In particular, for some low income countries the amount of capital flight (where elites move and hide monies offshore in tax havens) exceeds foreign aid. Governments struggle to enforce their tax laws to constrain these actions, but are inhibited by a lack of information concerning international capital flows. The main international policy response to these developments has been to promote global financial transparency through heightened cross-border exchanges of tax information. The paper discusses elements of optimal cross-border tax information exchange laws and policies by focusing on three key challenges: information quality, taxpayer privacy, and enforcement. Relatedly, the paper discusses how the exchange of automatic ‘big tax data’ combined with data analytics can help address the challenges.

Cockfield seeks to find a solution that balances the need of the state for extensive information in order to protect the integrity of the income tax system against the need of the individual for protection from abuse by the state. That is no easy balance to strike. From the paper:


All of [the recent information gathering and exchange] efforts seek to provide governments with more and better tax information, and reduce costs through agreement on underlying EOI rules and principles. The reforms, however, largely do not address how financial secrecy laws subvert global financial transparency initiatives. Nor do they address legal technical complexity that raises transaction costs, and makes it even harder for low and middle income countries to implement and enforce EOI. While the EOI reforms are positive steps, given an environment of high transaction costs it may be difficult to make progress in addressing key policy challenges....

Data availability, usefulness and verifiability are three components of high quality information that can help governments pursue their cross-border investigations and audits. In particular, transferred information should be relatable to domestic tax identification measures, and checked against third party reporting, and withholding tax disclosures. Once this is done, governments can conduct analysis to determine audit risk by focusing on issues such as taxpayer segmentation, dealings between the taxpayer and offshore service providers, and cross-indexing tax and financial information against non-tax data (e.g., insurance policy disclosures).

Against this desire for high quality tax information stands (shrugs?) taxpayer privacy concerns. The apprehensions arise from the varied levels of domestic legal protection afforded to privacy rights, along with the risk of abuse or misuse of transferred information. Accordingly, broader multilateral agreement on privacy protections is likely a prerequisite to effective EOI. This hoped-for cooperation is hindered by the fact that many countries refuse to abolish their financial secrecy laws, which stands as one of the main barriers to optimal reform.

My view is that maintaining the integrity of the income tax system appears to require building the panopticon, and much more besides. The steady decline of support for coherent corporate income taxation makes greater and greater individual surveillance necessary, while also making personal income taxation harder. I am not sure where the point lies at which the costs and risks attendant to building the necessary compliance and enforcement infrastructure exceed the benefits of maintaining personal taxes based on income.
Posted by Allison at 1:33 PM No comments:

Christians and Ezenagu: Kill Switches in the New US Tax Treaty

Recently published as part of the Brooklyn Law School symposium Reconsidering the Tax Treaty, this article looks at the introduction of new clauses to switch off treaty benefits where the treaty partner adopts certain kinds of tax rate or base reductions.  I think these clauses are interesting because they create a way for one country to control the future tax policy decisions of another. Whether other countries will agree to a treaty with such a provision is another story.


The new US model income tax treaty contains an unusual addition: mechanisms for the parties to unilaterally override the negotiated treaty rates in specified circumstances. Previewed last year in proposed form — a first for Treasury — these new mechanisms work as kill-switches, partially terminating the treaty as to one or both treaty partners. The idea is to forestall a more problematic outcome, such as an enduring breach of one of the parties’ expectations, or the opposite, a complete termination of all the treaty terms in the face of such a breach. Yet embedding a kill-switch in a treaty creates distinct legal, procedural, and political pressures in the tax-treaty relationship that implicate treaty negotiation, ratification, interpretation, and dispute resolution. Kill-switches also communicate a defensive tenor in the tax treaty relationships among many countries. This Article analyzes the new kill-switch provisions and concludes that their introduction in the U.S. Model reflects the steady deterioration of tax treaties from essentially diplomatic documents premised on the good faith of the parties to detailed contracts drafted in anticipation of the opposite.

Posted by Allison at 1:08 PM No comments: