For those not familiar with the practice of remission in tax, this is a regime under which the taxpayer can ask the tax authority to forgive their tax debts, manly due to hardship or extenuating circumstances. This was a new concept to me when I came to McGill in 2012 and learned about a rather generous remission order granted to Blackberry in what I assumed to be a last-ditch effort in the nature of industrial policy and national protectionism--but Prof. Singer's paper makes clear that the remission order is not only (or even primarily) for massive multinational companies. I am bothered by the idea that the tax authority has a more or less obscure power to forgive the tax debts of some taxpayers under unclear circumstances and using criteria that are not transparent or reviewable. This seems to me to be a tool which could create great distrust in the tax system, in terms of both procedural fairness for taxpayers who don't know about or get remission orders but also in terms of the opacity behind which some officials appear to have a tool to help selected individuals at their will. I look forward to the discussion of Prof. Singer's paper and the implications of this research for the big questions of tax governance.

This fall the Colloquium will explore a range of contemporary tax topics across three disciplines--law, economics, and philosophy. The complete colloquium schedule is below and more information is available here. As always, the colloquium is free and open to all. 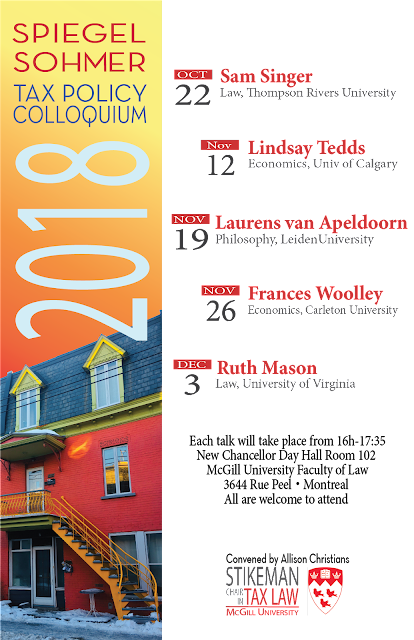 Posted by Allison at 2:09 PM No comments: