The next instalment in this fall's tax policy colloquium at McGill will feature Rebecca Kysar, who will speak about her forthcoming paper, Unraveling the Tax Treaty, today at 3pm. Here is the abstract:


Coordination among nations over the taxation of international transactions rests on a network of some 2,000 bilateral double tax treaties. The double tax treaty is, in many ways, the roots of the international system of taxation. That system, however, is in upheaval in the face of globalization, technological advances, taxpayer abuse, and shifting political tides. In the academic literature, however, scrutiny of tax treaties is largely confined to the albeit important question of whether tax treaties are beneficial for developing countries. Surprisingly little consideration has been paid to whether developed countries, like the United States, should continue to sign tax treaties with one another, and no formal revenue or economic analyses of the treaties has been undertaken by the United States government. In fact, little evidence or theory exists to support entrance into tax treaties by the United States, and examination of investment flows indicates the treaties may even lose U.S. revenues. Problematically, the treaties also thwart reforms of the antiquated and broken international tax system. The trajectory of the recent U.S. tax legislation illustrates this phenomenon.

Although tax treaties may have, at one time, served salutary purposes, modern circumstances call into question the relinquishment of taxing jurisdiction by source countries. I suggest that nations unravel the jurisdictional provisions from the treaties, abandoning or scaling them down, possibly through the new multilateral instrument. Rather than assessing antiquated notions of worldwide efficiency, the challenge for the international tax system going forward will be to attempt some degree of coordination while also imparting flexibility to advance national interests in setting revenue policy. This solution aims to thread that needle.

The colloquium is supported by a grant made by the law firm Spiegel Sohmer, for the purpose of fostering an academic community in which learning and scholarship may flourish. The land on which we gather is the traditional territory of the Kanien’keha:ka (Mohawk), a place which has long served as a site of meeting and exchange amongst nations. The talk will take place in New Chancellor Day Hall room 316; all are welcome to attend. 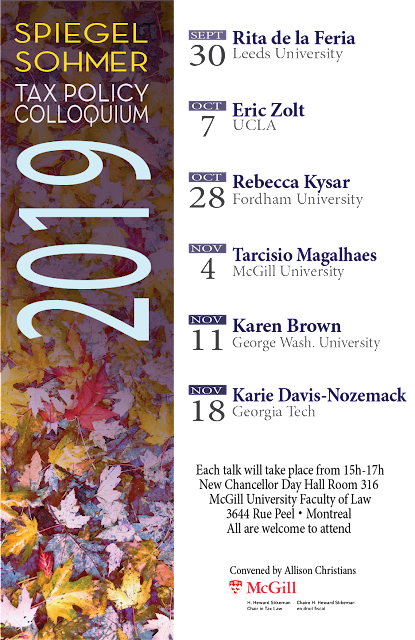