On Monday at McGill, Eric Zolt continues the fall tax policy colloquium with a presentation of his working paper entitled Tax Treaties and Developing Countries. Here is the intro:


Academics and others over the last 50 years have called for developing countries to hesitate or refrain from entering into bilateral tax treaties with developed countries. Tax treaties seek to facilitate cross-border transactions and investments by reducing tax barriers and providing greater certainty to foreign investors. But treaty provisions invariably result in countries yielding taxing rights. Since at least the 1920s, treaties have arguably provided greater taxing rights to the country where the investors reside (generally, capital-exporting developed countries) rather than the country where the economic activity takes place (often, capital-importing developing countries). Where capital flows are roughly equal between countries, rules that skew taxing rights towards residence-based taxation away from source-based taxation result in little or no revenue shifting. But where capital flows are less even, the tax revenue consequences may be substantial.

Framed this way, tax treaties share much in common with traditional tax incentives (such as tax holidays and favorable depreciation provisions). Viewing tax treaties as tax incentives changes the focus from whether the treaty provisions are fair to developing countries to whether this type of incentive generates economic benefits that justify the revenue costs.

Viewing tax treaties as primarily incentive delivery mechanisms provides a reason for substantial scrutiny of their costs and benefits--a rarity given the often oblique if not thoroughly opaque nature of treaty adoption and ratification procedures across countries. The paper makes the case that evaluating the effectiveness of tax treaties involving developing countries is complex and specific to the particular countries and treaty terms, and that the main issue to be queried should not be the fair distribution of revenues between differently situated countries but rather the economic costs and benefits of reducing taxation as an incentive for inbound investment.

Zolt argues that "the stylized world where tax revenue yielded by source countries is picked up by residence countries is more fiction than fact," at least, in a world in which most primarily capital-exporting (rich) countries have primarily territorial rather than worldwide tax systems as is the case today. The examination of alternative approaches to cost benefit analysis in the latter part of the paper provides a useful reminder that isolating the economic impacts of any given tax policy position is difficult, no less so when the policy in question is packaged in the form of  tax treaty instead of a statute. Zolt nevertheless concludes that


Countries (both developed and developing) need to do the hard work of estimating the economic consequences of entering into tax treaties. This country-specific and treaty-specific cost-benefit exercise will be challenging and frustrating, given the many different assumptions that will influence the calculations. But these challenges are similar to those for estimating the costs and benefits of tax incentives and other types of tax expenditures. The exercise will also inform a country’s negotiating positions by highlighting those provisions (such as zero or low withholding taxes) that contribute to potential revenue losses.

This paper is a timely contribution to the ongoing debate about how, and by which countries, cross-border income ought to be taxed, and I very much look forward to discussing it on Monday.

The colloquium is supported by a grant made by the law firm Spiegel Sohmer, for the purpose of fostering an academic community in which learning and scholarship may flourish. The land on which we gather is the traditional territory of the Kanien’keha:ka (Mohawk), a place which has long served as a site of meeting and exchange amongst nations. 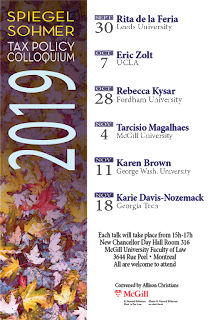