The Government of Canada has released its first study of the "tax gap," which the Government defines as "the difference between the tax that would be paid if all obligations were fully met in all instances, and the tax actually paid and collected." The Canada Revenue Agency (CRA) has not completed a study of the income tax, but has released this paper on the concept and methodology. It has presented a report for GST/HST (Canada's VAT), estimating the tax gap to average about 5.6% per year over the period 2000-2014. For 2014, this produced an estimated tax gap of about $4.9 billion: 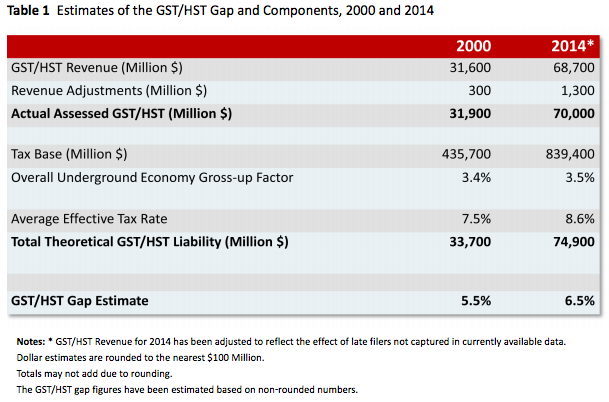 This study has been undertaken after many calls from academics and nongovernment organizations, including Canadians for Tax Fairness, which according to the CRA will be involved in consultations regarding the ongoing study. Canadians for Tax Fairness estimate that Canada loses $7.8 billion in income tax revenues to "tax haven" use, a number they constructed using Statistics Canada's foreign direct investment data.

The Government acknowledges that there is no reliable method for measuring the tax gap, and that the exercise is one in speculation based on imperfect information:


There are a number of challenges facing tax administrations undertaking tax gap estimation. The key challenge is access to the comprehensive and good-quality data necessary to produce estimates. A significant proportion of the tax gap involves unreported or under-reported income and assets and economic activity that are deliberately hidden from the government. As a result, many countries that publish tax gap estimates highlight their uncertainty.

Expect more to come from this exercise as the tax gap study is a key component of the Government's pledge to spend $444 million over five years "to enhance [CRA] efforts to crack down on tax evasion and combat tax avoidance."
Posted by Allison at 11:22 AM