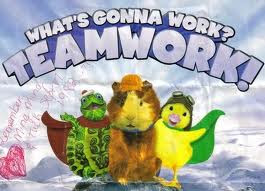 Lee Sheppard has a nice column today on dual consolidated loss rules and BEPS (gated), in which she states:

Of course she uses Argentina v Germany rather than the Wonder Pets, but same idea.

She goes on to explain the multiple problems posed by hybrid entities and how the BEPS hybrid draft has, and has not, addressed these. Sheppard's article demonstrates yet again that making income taxation work today means regulatory globalization that parallels the scale and scope of economic globalization.

The magnitude of the task is vividly demonstrated in FATCA: a concise statute that has rapidly expanded into thousands of pages of regulations, guidance, and agency explanations, a bilateral agreement network that dwarfs the US tax treaty network, and the spawning of a global compliance industry trucking in data collection, transfer, and analysis in both the private and public sectors. BEPS would be no different. it would require the same type of global infrastructure and the same level of sustained commitment. But it is clear that while the US has a great appetite for making FATCA work, and has directed all of its economic might to that effort, it is much, much less interested in seeing BEPS through. The ultimate outcome of BEPS is all too predictable from past OECD efforts that were not initiated by the US.