How to Buy a US Ambassadorship, and How Much to Pay

The recent news about the newly appointed US ambassador to Canada, Bruce Heyman--described as "A veteran Goldman Sachs & Co. executive and major fundraiser" for President Obama--reminded me of a paper I read some time ago in which the authors showed that ambassadorships are bought by contributing to the political coffers of the winning presidential candidate. All too unfortunately, this comes as no surprise. The more contributed, the more likely the desired post is obtained.  The paper is "What Price the Court of St. James? Political Influences on Ambassadorial Postings of the United States," by Johannes Fedderke and Dennis Jett, and here's a sample of the menu it describes, from a Table called "The Price of Some Lucrative Postings Implied by the Model": 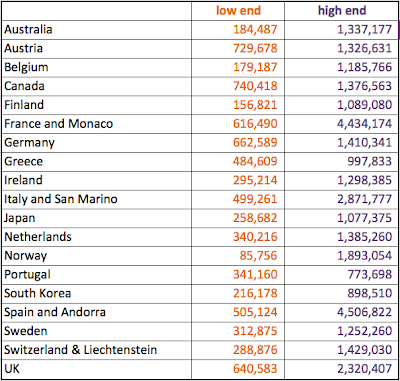 The paper notes the low-end cost is usually for bundlers, while high-end cost is usually for individual donors, and "the greater pay-off attaches to bundled rather than personal contributions." The Center for Public Integrity's story about Bruce Heyman affirms the authors' predictions. Notice in the table above that the low-end price for the ambassadorship to Canada, most associated with the bundlers, is $740,418. From the CPI story:


Chicago-based Bruce Heyman raised more than $750,000 for Obama’s committees since 2007, along with his wife, according to a Center for Public Integrity review of records.

From a National Post story on the appointment, Bruce Heyman looks to be happy about the outcome:
Related findings from the Fedderke and Jett paper, some of which also affirmed by the latest appointment:
And then there is this interactive from the CPI (below is a capture but you can click the link to roll over each country and see the details): 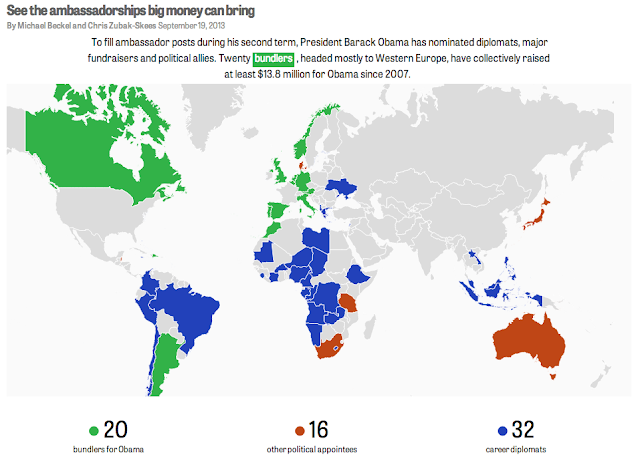 Notice how the bundlers and political appointees versus the "career diplomats" correspond to the observations above by Fedderke and Jett, and if you review the interactive's details about each of the ambassadors you get further affirmation of Fedderke & Jett's predictions about the costs of obtaining these posts based on their model. Incidentally, from the paper the price of the Court of St. James was "between $650,000 and $2.3 million": according to CPI, that appointment has been confirmed to Matthew Winthrop Barzun, National Finance Chair for Obama's 2012 campaign, who raised at least $1.2 million for the President. Fun fact: the first ambassador to represent the US there was John Adams, who, along with four others to hold that post, later became President themselves, thus completing the cycle. No idea how much each paid to get there, though.